Russell is a 22 year old inspiring singer who attended The Big Music Project. Russell from Pontypool, South Wales took to Youth Cymru’s Glanfa Stage and showed us what an incredible performer he is. He sang “fly me to the moon” “I wish you love” and “L.O.V.E.” Old songs for a young man I hear you say, I thought so to, but Russell’s favourite genre is Jazz. He loves the old classics and does not want the genre to die out, his aim is to keep it alive and show young people that this music is classic and should never be left out of your playlist! Russell loves to entertain and to put his own spin on songs; he also worked incredibly hard to get the crowd involved in his performance which we saw at The Big Music Project! He sang and dedicated songs to people in the audience and you could see that they really enjoyed it, but also were blushing with embarrassment at the same time! 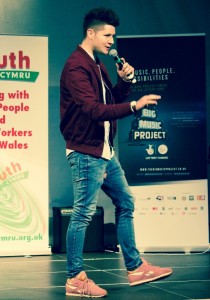 The Big Music Project helped Russell to meet new friends that he has kept in close contact with. Luckily for Russell he also met someone who was very interested in him and has asked Russell to perform at a few of his shows.

When I spoke to Russell after the event I asked him what was next for his music career.

“I am fully booked up until Christmas and have an event coming up in Exeter on 15th November for the Harry Cunningham Charity that helps sick babies and increasing awareness of Vasa Previa. It’s a massive event with celebrities like Kym Marsh, BGT’s twist and pulse, and reality starts from Made in Chelsea and The Only Way Is Essex. So I am really looking forward to it.”

I also asked him how he thought The Big Music Project went and what his favourite part of the day was.

“I felt the day went excellently, my highlight was listening to Plan B talking about how he got into music and watching Becky Hill perform and meeting everyone at Youth Cymru and performing for them-it was amazing!” 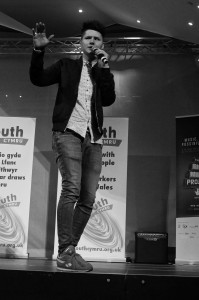 Russell began singing in care homes for the elderly when he was 17, this started to give him confidence, and the more he preformed the more confident he became. Russell started singing at gigs and even joined Only Boys Aloud. His gigs became bigger and he started to meet people that had a big influence on his career. Russell has preformed in music videos with big names like; The Saturdays, Ellie Goulding, Mary J Blige and Conor Maynard. Russell’s talent has helped charities such as, St David’s, CLIC Sargent, Macmillan and Dyslexia Wales to raise over £200,000. It has also led him to Essex, to perform at the opening of Amy Child’s Salon and Gemma Collins plus size women shop. Russell now plans to keep going in the music career and hopes that next year he will be talking to young people about he got into music.
Well done Russell! We are looking forward to seeing more of you in the future! Good luck!